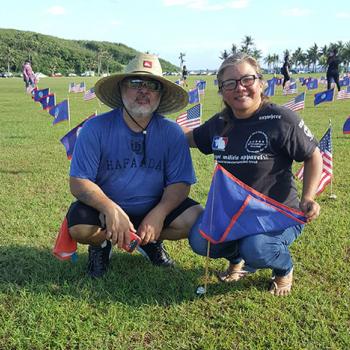 Christine Torres was born in Ipan, Talofofo, Guam on December 10, 1969. She is the fourth of six siblings, as well as the only daughter. She is the daughter of the late Antonio Santos Quitugua and Teodora Kamo Paulino Quitugua. Christine is married to Thomas J. Torres and they have five children: Corey, Tomara, Cera, Cidnie and Thomas II and two grandsons: Cleo Sage and Cove Emmerson. She joined the Guam Army National Guard in November of 2005 at the age of 36. She deployed to Afghanistan in 2008 with Team Alpha, 1-294th Infantry Regiment Battalion assigned to 2nd platoon. A few years after deployment, Christine was diagnosed with Depression and Anxiety Disorder and developed Psoriasis from the deployment. The U.S. Army medically discharged Christine from the ARNG on June 24, 2015. Christine currently resides in Talofofo, Guam (“God's Country”) and continues to work for the Government of Guam with over twenty-eight (28) years of service.
JOINING


Christine is thirty-six years old, and she has just started a new job at the Guam Housing Corporation. She is the mother of five children, and the wife of an Army veteran. The idea of joining the military has been on her mind for a while, quite a while, but it’s been on hold.

“I’ve been wanting to join, but I’ve been putting it off because every time I thought about it, I’m pregnant,” Christine says.

Things have changed in Christine’s family, from one generation to the next: her mother stayed home with the kids and managed the house as a housewife—she did not go to work, let alone join the military. But things are different now. The military is something Christine is curious about, something she wants to try out.

Christine’s husband had tried to go back in through the Guard, but medical issues prevented him from reenlisting. And Christine knows that by joining the military, she can enroll her family in TRICARE, which means not only health care coverage but also access to health care facilities they wouldn’t otherwise be able to use. She and her husband will also have commissary and exchange privileges at Andersen Air Force Base and Naval Base Guam, and with those privileges, the reduced cost of food and household goods will help Christine and her husband raise their family.

Christine calls a Guam Army National Guard recruiter to ask questions, and talks with her family about joining the military. “I had to make sure that my family was with me, at least 110%,” Christine says. She and her husband decide that he will take care of the kids when she is away for training.

She also talks with her supervisors at the Guam Housing Corporation. “They gave me the support,” Christine says. “They let me do what I needed to do.”

She takes the ASVAB, and takes it again. “The first time when I failed, it just didn’t stop me. I kept pursuing it because this is what I wanted to do,“ Christine says. After she passes the ASVAB, she completes the enlistment process and takes the oath at the Guam Army National Guard Readiness Center.

“The first day when I swore in at the Guard, I can remember I got my papers, and the first thing we did was head to the commissary,” Christine says.

“That was just like, ‘Wow,’ you know, just looking at the prices,” Christine remembers. “‘Whoa,’ you know, ‘I cannot afford to get out. I got to hold on to this ID card as far I can get.’”


For Christine, Army Basic Combat Training is a series of obstacles to deal with, challenges to overcome.

So often, she wants to throw down her rucksack and say, To hell with this. I don't need the ID card, right? I want to go home.

She trains herself to shift her attitude, shift her thinking, over and over again. Negative to positive. She tells herself, I know I can do this. I asked for this. I asked to join. This is one thing that I want to accomplish to the best I can and make my family happy in the end.

“That’s what actually helped me accomplish what I needed to do,” Christine says.

At thirty-six years old, Christine is the oldest female soldier in her platoon. In the Army’s battle buddy system, she’s paired with a young recruit nearly half her age from Topeka, Kansas, Specialist Kostelecky. Christine had had doubts about sharing her space with a bunch of teenagers, but she and Kostelecky help each other through.

“What really, really helped me was my battle buddy,” Christine says.  “Without her, I guess I would have gone nuts in there.”

Kostalecky helps Christine steel her focus through the demands of training, tells her to forget, forget the naysayers around them, and helps her push through.

“You’ve gotta do this,” Kostalecky tells her as they train, pushing her, encouraging her. “You have five kids, you're thirty-six years old, you can do this. You can do this.”


The Warrior Tower at Ft. Leonard Wood in Missouri stands higher than each of the letters of the Hollywood Sign. The Tower is 47 feet high, and in Army Basic Combat Training recruits must climb and crawl and climb to the top of the tower, and then rappel down its sheer vertical wall.

Christine has a fear of heights. She learns how to tie rappel seats, how to keep safe, how to rappel down a 45 degree incline. And the fear is still with her as she ascends up the wooden planks of the Warrior Tower’s ladder, and crawls across the platform to another set of steps.

This is something she never thought she could do. This is someone she didn’t know she could be, withstanding her fear at the top of the tower, in line for her turn at the rappelling rope. With the help of a rappel master, she positions herself over the edge of the tower, her back to the sky, and pushes off the wooden planks of the vertical wall. For a moment she’s in the air, more than forty feet off the ground. Then her feet land on the wall, a little further down from where she was before. She jumps again, and again, and again.

“I never knew I was like that,” Christine says, remembering. “It was just an awesome feeling to have that I thought I’d never have.”

When she reaches the ground, she’s relieved. She does not have to see this tower ever again. She’s so done with this part of her training.

Then she hears from her drill sergeant.

“Torres, you’re not ready,” her drill sergeant tells her. “Just go back up again.”

Christine thinks, What?! Ugh...you know how hard it was for me just to get to the top? Very hard...with this height of mine and my short legs.

She climbs back up to the top of the tower, and rappels down.

On the ground, she feels stronger. Her fear of heights hasn’t gone away, but she feels better.

“It actually boosted my confidence,” Christine says. “A lot of it had to do with confidence, building my confidence up and also, being a better person.”

It is the last day of Army Basic Combat Training, and Christine’s hands are numb. She’s taking her final rifle marksmanship qualifications in the heat of the Missouri summer. The barrels of her rifles are steaming hot and this, she thinks, is her last chance.  She focuses on the pop up targets, breathes in, exhales slowly and pulls the trigger of her M-16, praying that she makes the numbers just to qualify.

She has five kids waiting at home in Guam. Her youngest is two years old, and her husband has been taking care of them all for the past several weeks while she’s been away. It’s a long time to be away from them, far too long.

“The hardest part of joining and leaving was my family,” Christine says, “leaving my family behind, and just trying to focus on the tasks I needed to do.”

Her platoon is friendly but she doesn’t expect them to be out here. At 36 years old, she’s the oldest female in her assigned platoon, and there’s a huge gap of experience and outlook between them. She’s got to make it through the test on her own.

In boot camp, her biggest fear, her biggest obstacle is the marksmanship test. She’s been having trouble with marksmanship since she got to boot camp. Her height was causing problems, and one of her female drill sergeants helped her early on, telling her, “Torres, remove to sandbag.” Christine is right-hand dominant, and instinctively practiced shooting with her right hand. She wasn’t getting anywhere, until another drill sergeant realized that Christine’s left eye was stronger than her right eye, and that she should shoot with her left hand.

The adjustments helped her, and she kept practicing and practicing, but it’s taken a while to get back on track. And she needs to qualify—if she doesn’t, they had told her, she’ll need to restart her training back on day one, back in the red phase.

Hell if I want to go through that, Christine thinks.

Finally, she hears them call out, “Lanes 1, 2, 3, please clear and rod your weapons.” She hears them say, “You qualified.” At this moment, she doesn’t care what she scored. All she cares about is that she did it. She passed and is one step closer to HOME.

This was it, the hardest challenge. She knows she’ll pass the physical training (PT) test. That it’s smooth sailing from here.

“Oh my god, I was just jumping up for joy,” Christine says.

Then she hears, “Yay, Torres!”

She turns around; her platoon is there. She didn’t know anybody else had been watching.

“My whole platoon was there supporting me, which was...you know?” Christine says. “I was so happy and so glad.”

After passing her PT test, she heads on to AIT, Advanced Individual Training.

The feeling is unexplainable, Christine says. “It’s something that no one can ever take away from you.” 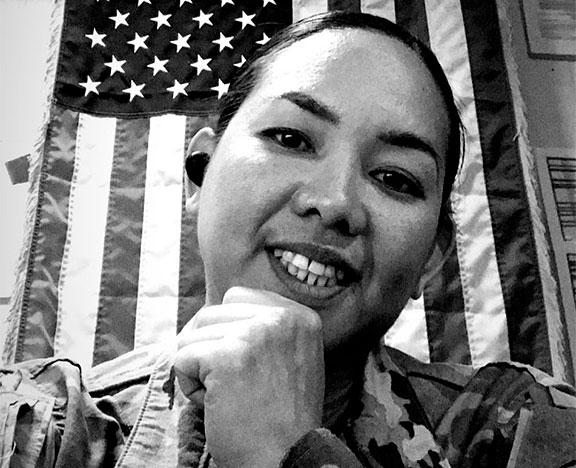 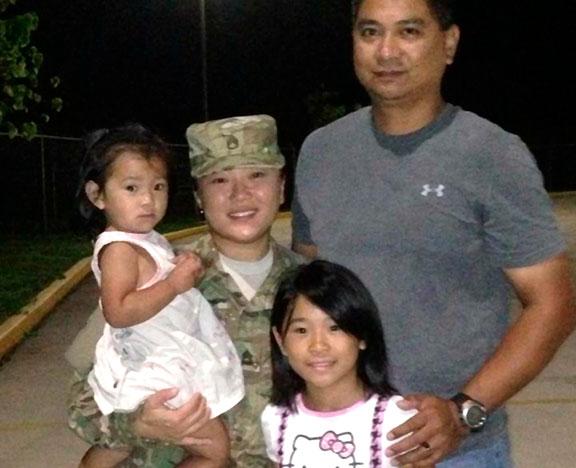 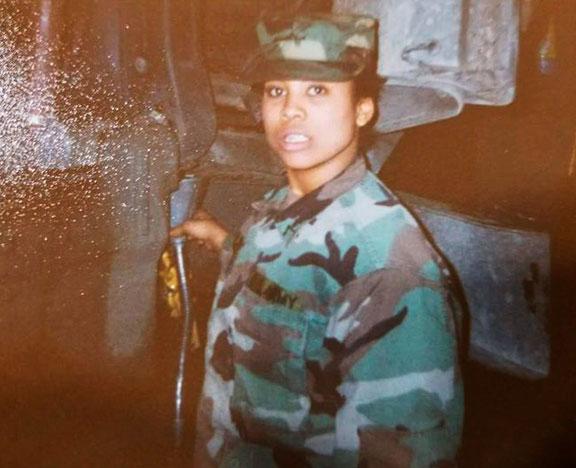 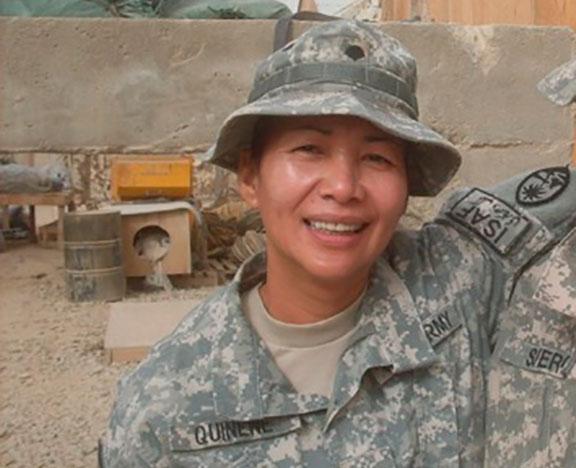